A former CoachArt student teaches the world about CF

What would you do if life gave you a life-threatening, chronic illness at a tender, young age?

Moreover, what if that life was nearly taken from you after a routine surgery?

For former CoachArt student Claire Wineland, the answer is to open up your world to let others know what it’s like. She chronicles her experience living with cystic fibrosis with laughter, a vibrant smile and total transparency on her Youtube page “The Clairity Project.”

After coming back from a two-week induced coma to save her life, Claire decided to not only survive, but thrive. She is a singer, an artist, a composer, and a natural-born comedian. Her humorous approach to dealing with cystic fibrosis radiates warmth and wisdom beyond her years.

Cystic fibrosis damages the lungs and digestive system by causing massive mucus buildup in the lungs. Claire had already spent ? of her life in the hospital and received over 35 surgeries. Her life was forever changed in 2010 when she went into the hospital for a routine procedure and became septic with complete lung failure in 24 hours. At that moment, her parents were given two options; say goodbye to Claire as she slowly passed away or put her on an oscillator vent with the odds for children being very slim. Her parents decided to put her on the vent in a drug induced coma, hoping for the best. Miraculously, Claire came out of the coma in a few weeks.

Her comedic approach towards dealing with the disease has led to numerous awards, including Fox Teen Choice Awards 2015 Teen Choice Pro-Social Honoree, Gloria Barron Prize for Young Heroes, and a Soaring Spirit Award. Although she still suffers many setbacks, she maintains a positive attitude, believing this is key to living a fulfilling life – despite being burdened with such a deadly disease.  Claire’s transformative story continues to inspire and embody everything about CoachArt. 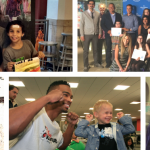